This blog feeds from Blogger, so please forgive the lack of formatting, to see it in a better light, do visit the blog here.

TODAY ONLY! THE SPECTRAL CITY is only 1.99 across all digital platforms! A Perfect Halloween Read! (Wed, 14 Oct 2020) 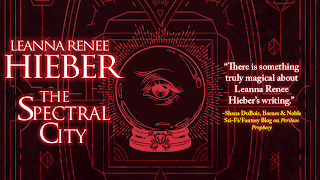 TODAY ONLY (10/14/20) THE SPECTRAL CITY, book 1 in Leanna's acclaimed, digitally bestselling SPECTRAL CITY trilogy of ghost-filled, Gothic, Gaslamp Fantasy novels is only 1.99 across all digital platforms! This book features an adorable slow-burn romance, an inclusive, found family of loveable characters alive and dead and an eerie, gaslit, gilded age NYC! About the book via Kensington Books: Solving crime isn’t only for the living. Her name is Eve Whitby, gifted medium and spearhead of The Ghost Precinct. When most women are traveling in a gilded society that promises only well-appointed marriage, the confident nineteen-year-old Eve navigates a social circle that carries a different kind of chill. Working with the diligent but skeptical Lieutenant Horowitz, as well as a group of fellow psychics and wayward ghosts, Eve holds her own against detractors and threats to solve New York’s most disturbing crimes as only a medium of her ability can.   But as accustomed as Eve is to ghastly crimes and all matters of the uncanny, even she is unsettled by her department’s latest mystery. Her ghostly conduits are starting to disappear one by one as though snatched away by some evil force determined to upset the balance between two realms, and most important—destroy the Ghost Precinct forever. Now Eve must brave the darkness to find the vanished souls. She has no choice. It’s her job to make sure no one is ever left for dead.   “There is something truly magical about Leanna Renee Hieber’s writing.”  —Shana DuBois Barnes & Noble Sci-Fi/Fantasy Blog on Perilous Prophecy Pick your favorite eBook vendor here and follow Leanna on BookBub!   Like the idea of THE SPECTRAL CITY? The whole trilogy is available wherever books are sold with A SANCTUARY OF SPIRITS and A SUMMONING OF SOULS, which just released at the end of July! 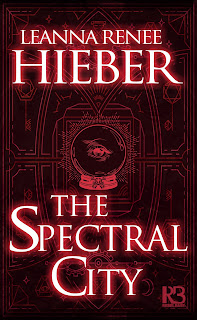 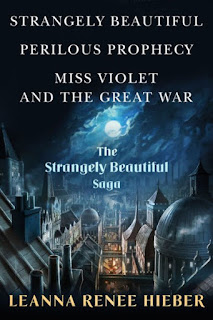 DARLINGS! EPIC BOOK SALE!  In the mood for Gothic, Gaslamp Fantasy? Think Jane Eyre + Ghosts + Penny Dreadful + Greek Myths and you've got STRANGELY BEAUTIFUL, a saga of four award-winning novels, books 1 and 2 combined into STRANGELY BEAUTIFUL, a haunting, epic prequel full of deadly forces and sweeping romance in PERILOUS PROPHECY and the finale, MISS VIOLET AND THE GREAT WAR - all for just 2.99 thanks to Tor Books! What a steal! Only available for a limited time so buy now! Barnes and Noble - Kobo - Google Books  - eBooks.com - Amazon About the series, via Tor Books: Award-winning author Leanna Renee Hieber brings to life an exciting, romantic gaslamp fantasy in the groundbreaking, critically acclaimed Strangely Beautiful saga. Set in the Victorian era, Strangely Beautiful chronicles the adventures of the Guard — ordinary people blessed with the ability to see ghosts, heal illness, dispel demons, and more. Despite their weighty tasks, they are still human, and their lives and loves are inevitably intertwined, even as they stand between humanity and all the horrors of the underworld. Strangely Beautiful: (Contains both The Strangely Beautiful Tale of Miss Percy Parker and The Darkly Luminous Fight for Persephone Parker in revised, author-preferred editions with extra content!) Miss Persephone Parker—known as Percy—is different, with her lustrous, snow-white hair, pearlescent pale skin, and uncanny ability to see and communicate with ghosts. Seeking to continue her education, Percy has come to to the Athens Academy in Queen Victoria's London, not knowing that it is the citadel of The Guard. The Victorian Guard, latest incarnation of an ancient order that battles evil in all its forms, is led by Athens professor Alexi Rychman. Percy's lifelong habit of concealment, combined with Alexi's fevered search for the Guard's missing seventh member, nearly prove disastrous as ancient Greek myths begin playing out in modern, gaslit, Victorian London. Percy and her new friends and allies must overcome their preconceptions about each other and their own histories before they can set the world to rights. Perilous Prophecy: In this enchanting prequel to Strangely Beautiful, Cairo in the 1860s is a bustling metropolis where people from all walks of life mix and mingle in complex harmony. When evil ghosts and unquiet spirits stalk the city’s streets, the Guard are summoned—six young men and women of different cultures, backgrounds, and faiths, gifted by their Goddess with great powers. While others of the Guard embrace their duties, their leader, British-born Beatrice, is gripped by doubt. What right has she, a bookish, sheltered, eighteen-year-old, to lead others into battle? Why isn’t dark-eyed, compelling Ibrahim the one in charge? As ghosts maraud through Cairo’s streets, heralding a terrible darkness, Beatrice and her Guard have little time to master their powers; a great battle looms as an ancient prophecy roars toward its final, deadly conclusion. Miss Violet and the Great War: An adventure full of passion and power. From childhood, Violet Rychman--daughter of Percy and Alexi--has dreamed of a coming war, of death and battle on an unimaginable scale. Like her mother, she has seen and heard ghosts, who have loved and guided her. Now the future Violet dreamed is coming to pass as World War I rages across Europe. Millions of people are dying; entire villages are disappearing. Violet is nearly overcome when the Muses of antiquity offer her powers greater even than those of her parents or the Guard. The ability to impact people’s memories, even shape their thoughts. To guide their souls. To pass between the world of the living and that of the dead and to bring others through that passage. Violet must use these gifts in an attempt to stop death itself, lest the whole world be destroyed. Barnes and Noble Kobo Google Books  eBooks.com Amazon http://www.leannareneehieber.com

THE SPECTRAL CITY now available across all formats and platforms, starting at only $3.99!

THE ETERNA SOLUTION is here! Read a rave review via Criminal Element!

Read "The Spark" a FREE novella in the ETERNA FILES world!

Leanna is featured in the Gaslamp Fantasy anthology QUEEN VICTORIA'S BOOK OF SPELLS!

DARKER STILL: A Novel of Magic Most Foul has been named an ABA Indie Next title!

The Dark Nest Chronicles are now together for the first time!

The Perilous Prophecy of Guard and Goddess wins the 2012 Prism Award for Best Fantasy!